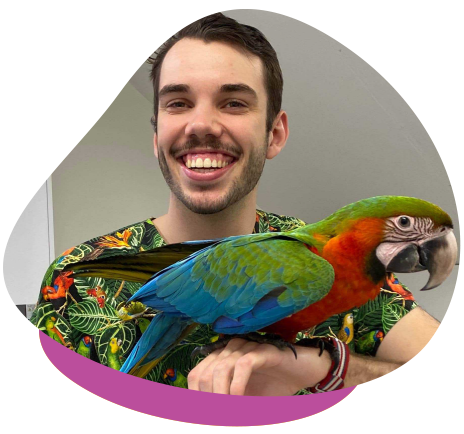 Harry graduated from the University of Queensland in 2019 with a Bachelor of Veterinary Technology where he found a passion for exotic animals and specifically birds.

Harry is a firm believer that parental interest will be translated into a passion of children, and so it was his dad’s love of birds that rubbed off on him. He grew up going through his dad’s bird watching books to look at the pictures. From this, Harry decided that he wanted to end up in the veterinary industry in some regard. As he learned more about birds, Harry became awe-inspiring as to what the extraordinary evolutionary pressures would be in place to allow something to fly, and the biology that developed, and as a result, has always amazed him.

Despite Harry’s love for birds, he is excited about the opportunities and challenges associated with all avenues of exotic medicine.

Outside of work, Harry likes building things and working out how things work. He loves working on his car and building computers. Harry also has a keen interest in motorsports and photography. However, his biggest love in this world is snow skiing which is a rare privilege but an interest, nonetheless.

Harry has owned pets throughout his life, including a 20-year-old Cockatiel and 19-year-old Jack Russel Terrier but is on the lookout for a feathered friend to join his family unit.

I had my guinea pig Dasher booked in for castration and microchipping as part of the Hop Start Package and the staff there were very friendly, insightful, professional and helped to calm my nerves about the surgery. All went really really well and Dasher is loving his new food. I highly recommend them.

Absolutely exceptional, every team member I encountered conducted themselves with absolute professionalism, compassion and care, and should be commended for their awesome work especially with the changed conditions they have had to accommodate for during COVID19.

Thank you for going above and beyond to make the loss of our little man Winnie (ferret) as peaceful and painless as possible.

I cannot thank Dr Kelly and her staff enough for taking such great care of my 2-year-old Blackmoor goldfish ‘Pepper-Potts’.

Removing her eye has given her back her quality of life, she is a very happy girl again. Incredible knowledge, experience & great love and care was given, thank you so very much.

💙 Pepper-Potts & I love you all

I can’t speak highly enough about the team of vets and vet nurses who saved my baby weiro when he was very close to passing away. The service and care have been exceptional from the very start! Outstanding communication, phone call follow-ups, prompt replies to emails, extremely professional, so caring and empathetic. They really are just AMAZING at The Unusual Pet Vets.

A very special thank you to Dr Luke, who has been so committed to saving my little bird from day one and holding onto hope for him. My family and I are so thankful for you and your team for all you have done for him and for his ongoing care and treatment. You guys are awesome!

We are so happy to have now found our bird Buddy a fantastic vet service. The service we received from Dr Kelly and her team from start to finish was so welcoming and friendly.

I have been taking my python to Dr Josh since I got her 5 years ago. He is always very compassionate and goes through everything in great detail. In the beginning, I asked a LOT of questions and he always made time to answer as soon as he could. The new clinic is fantastic, and I know my animals are 100% safe and comfortable whilst there.

Always a pleasure visiting unusual pet vets. They take good care of our birds and answer any of our questions with in-depth responses. I have seen Dr Sam a few times and it’s obvious he loves his job and the animals he treats, and I’m sure all the doctors are the same. 10/10 thanks so much!

Fantastic care as always for our bunny with gut stasis. They called to bring our appointment forward to make sure that he received any necessary care as quickly as possible and gave us great information about the problem and the follow-up care and treatment. So reassuring to know that you are in expert hands.

A wonderful clinic that accepted an adorable, yet dazed Eastern Yellow Robin after it flew into my window. It was such a relief this service was available on a Sunday afternoon before a public holiday. Such commitment to preserving the wellness of our beautiful native wildlife must be commended, we’re so fortunate to have these dedicated saints.

Absolutely the best vet, they are so caring and dedication to their job. I cannot recommend them enough. Thank you.

We’re open as normal, however new safety measures are in place.